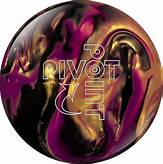 Environments to Use: Medium to Heavy Oil, League and Sport Patterns.

The Pivot Point is the newest high performance ball from Ebonite. Its sister ball, the Pivot has been a very successful ball for me especially in heavier oil and higher volume environments. At times the Pivot is too strong for the surface and/or the environment. The Pivot Point is the perfect companion to the Pivot. This is one of the rare balls that is factory polished but yet has strong ball motion in higher volumes and longer patterns. When the Pivot is too early, the Pivot Point is very clean and reads the body of the lane (midlane) but yet still maintains the angular shape at the back of the lane. It is a great transition ball to the Pivot.

The first event I used the Pivot Point in was a local scratch event. For the 8 game block, I set the 8 game record averaging 267 with the Pivot Point. The surface was HPL and the volume was medium to medium high.

Ebonite’s ball lineup currently is the best I have seen in many years. The Pivot Point is one of those rare balls that’s hard to keep in your bag. This is a tremendous ball!

- More Core: All new AXS core design focuses on bringing the best we can design in core dynamics and shape!

- Contour Planes: With all the research our R and D team has done on contour planes, the new AXS core has been designed to allow ball drillers more confidence in drilling, by eliminating large "void" areas in the contour profile.

- Advanced Drilling Stability: This is something that we talked about in the Empire core shape, and the AXS core shares this unique feature. As a result of the unique shape of the AXS core, you will change the values of RG and Differential at the same rate when drilling.

Comments:
I used this ball out of the box, which is 1500 abralon. This is the cleanest high performance ball that I have used in many years. The exciting thing about the Challenge is its response in oil. Many balls that get through the front part of the lane usually respond very strong when it reads friction (resulting in a over/under reaction). Because of its' new core and coverstock, the Challenge clears the first 15 feet very clean and reads the mid lane with strong continuation through the pins. This combination eliminates the expected over/under and creates a ball motion that is strong but still very manageable during transitional stages of the lanes.

I used the Challenge fresh out of the box on a league pattern and threw a 26 bagger for 300/800+. I have also used the Challenge on a Viper pattern in a tournament and led from the start to finish. Both patterns were different lane surfaces (wood vs HPL), types of oil, patterns and lane machines (Kegel vs Brunswick). The results show just how versatile this ball is and can be for a variety of players, lane surfaces and patterns.

I recommend this new HP Ebonite product to any bowler who wishes to have instant success and add a piece to his/her arsenal that is the first ball out of the bag for medium to heavy oil patterns. Ebonite has hit a homerun with this combination of its' new core technology and coverstock. This ball should CHALLENGE any competitor's ball for Ball of the Year!