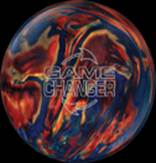 Comments: This series has always been one of my favorites since it first hit the market with the V2.  Ebonite has continued to tweak the core and veneer for peak level performance in medium to high volume oil environments.  I have used the Game Changer on a modified USBC National pattern and your typical league pattern.  The Game Changer gave me a very similar look to its’ ancestors (Game Breaker, Play Maker, etc) but it responded much stronger in the higher volume.  The mid lane was strong as usual and the response off my breakpoint was more angular than the older versions.  The Game Changer performed extremely well on both environments.  The USBC modified pattern had ratios from side to side that somewhat level while the league pattern consisted of your normal high/low ratio.

I had a chance to use this ball for a few games in a Pittsburgh Bowler’s Tournament Team event, in which my team won.  I had to adjust the surface to a smooth 4000 abralon.  It worked extremely well until later in the day.   The cover eventually was too strong for the transition.  This ball is my bench mark because of its versatility and performance.  Another great addition to the performance ball line from Ebonite.